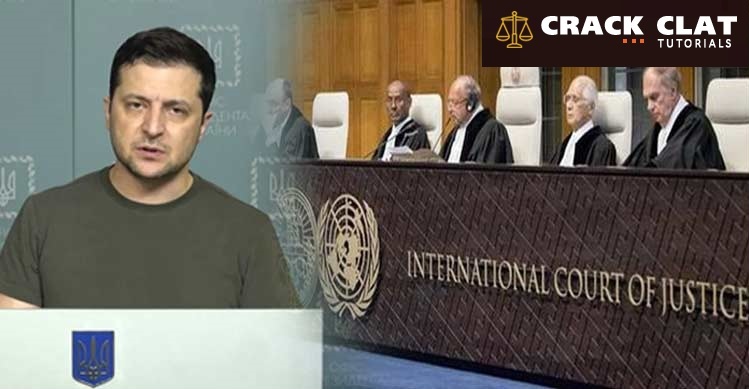 Ukraine has filed an application before the International Court of Justice (ICJ), instituting proceedings against the Russian Federation concerning the Genocide Convention of 1948.

Ukraine has accused Russia of falsely claiming that “acts of genocide have occurred in the Luhansk and Donetsk oblasts of Ukraine”, and of using that as a pretext to recognise the independence of these regions and of going to war against Ukraine.

2. The court is the successor to the Permanent Court of International Justice (PCIJ), which was brought into being through, and by, the League of Nations, 1922.

3. After World War II, the League of Nations and PCIJ were replaced by the United Nations and ICJ respectively.

4. The PCIJ was formally dissolved in April 1946, and its last president, Judge José Gustavo Guerrero of El Salvador, became the first president of the ICJ.

5. The first case, which was brought by the UK against Albania and concerned incidents in the Corfu channel — the narrow strait of the Ionian Sea between the Greek island of Corfu and Albania on the European mainland — was submitted in May 1947.

1. Like the PCIJ, the ICJ is based at the Peace Palace in The Hague.

2. It is the only one of the six principal organs of the UN that is not located in New York City. (The other five organs are the General Assembly, the Security Council, the Economic and Social Council, the Trusteeship Council, and the Secretariat.)

3. The judges of the court are assisted by a Registry, the administrative organ of the ICJ.

4. English and French are the ICJ’s official languages.

6. The judgment of the ICJ is final and technically binding on the parties to a case. There is no provision of appeal; it can at the most, be subject to interpretation or, upon the discovery of a new fact, revision.

7. However, the ICJ has no way to ensure compliance of its orders, and its authority is derived from the willingness of countries to abide by them.

Judges of the court

1. The ICJ has 15 judges who are elected to nine-year terms by the UN General Assembly and Security Council, which vote simultaneously but separately.

2. To be elected, a candidate must receive a majority of the votes in both bodies, a requirement that sometimes necessitates multiple rounds of voting. Elections are held at the UNHQ in New York during the annual UNGA meeting.

3. A third of the court is elected every three years.

4. The president and vice-president of the court are elected for three-year terms by secret ballot. Judges are eligible for re-election.

5. Four Indians have been members of the ICJ so far.

a. Justice Dalveer Bhandari, former judge of the Supreme Court, has been serving at the ICJ since 2012.

d. Sir Benegal Rau, who was an advisor to the Constituent Assembly, was a member of the ICJ from 1952-53.