The Nobel Prize in Chemistry 2018

The 2018 Nobel Prize in Chemistry awarded to Frances H. Arnold and the other half jointly to George P. Smith and Sir Gregory P. Winter for their work harnessing the power of evolution to develop new proteins used in drugs and medical treatments. 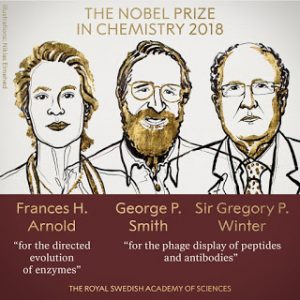 In announcing the award, the Royal Swedish Academy said that this year’s prize “awards a revolution based on evolution,” and goes to scientists who “applied the principles of Darwin in the test tube.”

The methods developed by the laureates have been put to work to create new enzymes and antibodies used in promoting a greener chemicals industry, mitigating disease and saving lives.

Arnold, of the California Institute of Technology, was recognized for performing the first-ever “directed evolution” of enzymes, which are proteins that catalyze chemical reactions. Enzymes produced through directed evolution are used to manufacture everything from sustainable biofuels to pharmaceuticals.

Smith, a professor at the University of Missouri, won for a method known as “phage display,” which uses bacteriophage — a virus that infects bacteria — to evolve new proteins.

Winter, of the University of Cambridge in the UK, harnessed that method and used it to produce new antibodies, with the aim of making new drugs. Phage display has since been used to produce antibodies that can neutralize toxins, counteract autoimmune diseases and cure metastatic cancer.