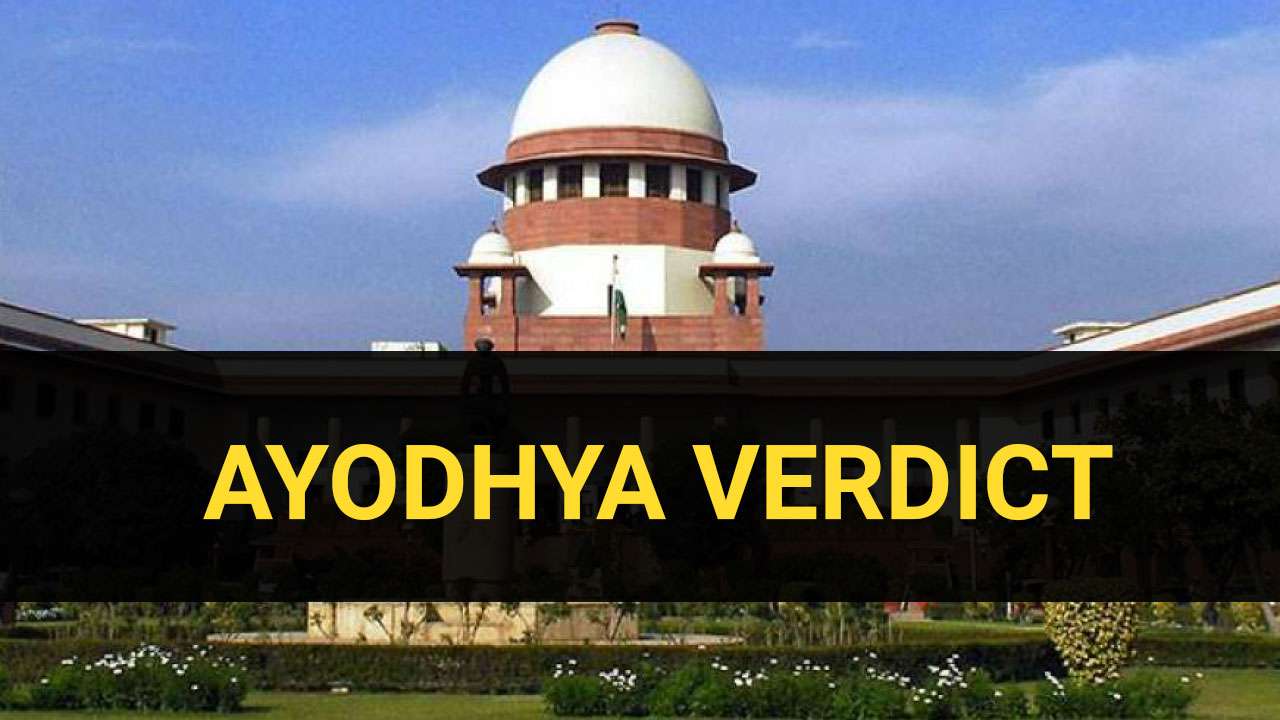 The Supreme Court cleared the way for the construction of a Ram Temple at the disputed site at Ayodhya, and directed the Centre to allot a 5-acre plot to the Sunni Waqf Board for building a mosque.

In one of the most important and most anticipated judgements in India’s history, a bench headed by Chief Justice Ranjan Gogoi put an end to the more than a century old dispute that has torn the social fabric of the nation.

The apex court said the mosque should be constructed at a “prominent site” and a trust should be formed within three months for the construction of the temple at the site many Hindus believe Lord Ram was born.

The site was occupied by the 16th century Babri mosque which was destroyed by Hindu kar sevaks on December 6, 1992.

The bench, also comprising Justices S A Bobde, D Y Chandrachud, Ashok Bhushan and S Abdul Nazeer, said possession of the disputed 2.77 acre land rights will handed over to the deity Ram Lalla, who is one of the three litigants in the case. The possession however will remain with a central government receiver. 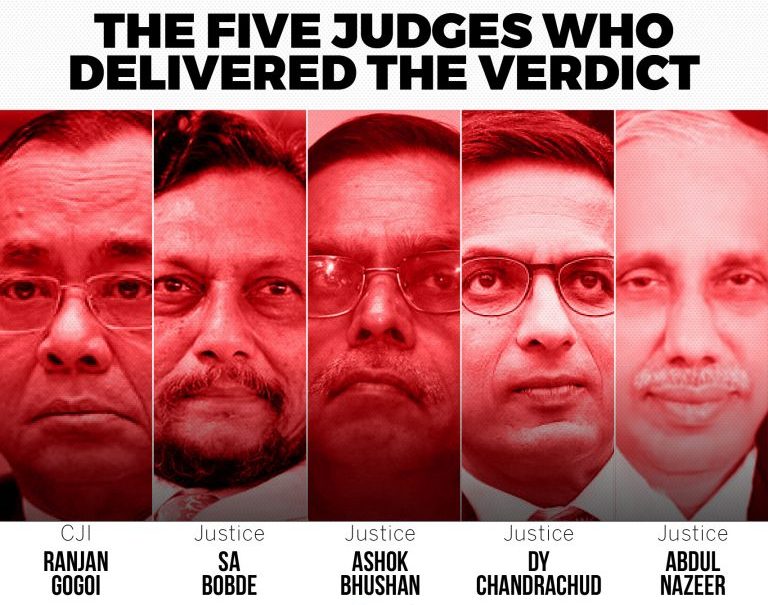 The Supreme Court said the Hindus have established their case that they were in possession of outer courtyard and the UP Sunni Central Waqf Board has failed to establish its case in the Ayodhya dispute.

Delivering its verdict in the politically-sensitive case of Ram Janmbhoomi-Babri Masjid land dispute in Ayodhya, the apex court directed allotment of alternative land to Muslims to build a new mosque.

The apex court said the extensive nature of Hindus worshipping at outer courtyard at the disputed site has been there, and the evidence suggests the Muslims offered Friday prayers at mosque which indicates that they had not lost possession of the site. It said that despite obstruction caused in offering prayers at Mosque, the evidences suggest that there was no abandonment in offering prayers.

The apex court further said that the underlying structure below the disputed site at Ayodhya was not an Islamic structure, but the ASI has not established whether a temple was demolished to build a mosque. It said that terming the archeological evidence as merely an opinion would be a great disservice to the Archaeological Survey of India (ASI).

The court also said that the Hindus consider the disputed site as the birthplace of Lord Ram and even Muslims say this about that place. The faith of the Hindus that Lord Ram was born at the demolished structure is undisputed, the apex court said. The bench said the existence of Sita Rasoi, Ram Chabutra and Bhandar grih are the testimony of the religious fact of the place. The apex court said however that the title cannot be established on the ground of faith and belief and they are only indicators for deciding the dispute. 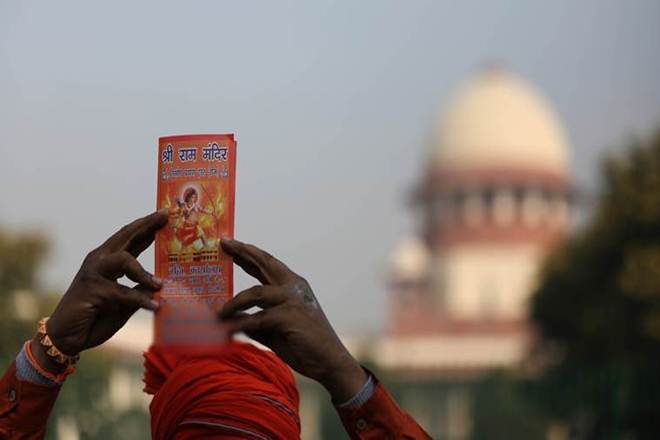 The following are the highlights of the Supreme Court judgement in which it unanimously granted the entire 2.77 acre of disputed Ram-Janmbhoomi Babri Masjid land in Ayodhya to deity Ram Lalla.

– Possession of disputed land will be handed over to the deity Ram Lalla, one of the three litigants in the case.

– The land will remain with a central government receiver.

– The disputed site was government land in the revenue records.

– Suitable land of 5 acre to be handed over to Sunni Waqf board at prominent place for building the mosque.

– Centre to frame scheme within 3 months and set up a trust for construction of a temple.

– Centre, UP govt can monitor together future actions by authorities.

– SC asks the Centre to grant representation in the trust to Nirmohi Akhara if deemed fit by the government.

– SC holds that Nirmohi Akhara’s suit is barred by limitation, not a Shebait or devotee of deity Ram Lalla – Ram Janmbhoomi is not a juristic person.

– Babri mosque, demolished on December 6, 1992, was not built on vacant land.

– SC says that terming the archeological evidence as merely an opinion would be a great disservice to the ASI.

– Fact that there lay a temple beneath the destroyed structure has been established by the ASI, says SC.

– The underlying structure was not an Islamic structure.

– ASI had not established whether temple was demolished to build the mosque.

– Hindus consider this place as birthplace of lord Ram, even Muslims say this about disputed place.

– Faith of Hindus that Lord Rama was born at demolished structure is undisputed.

– The existence of Sita Rasoi, Ram Chabutra and Bhandar grih are the testimony of the religious fact of the place.

– Evidence suggest Hindus were in possession of outer court yard.

– Extensive nature of Hindus worshipping at outer courtyard at site has been there.

– Evidence suggest Muslims offered Friday prayers at mosque which indicates they have not lost possession.

– Despite obstruction caused in offering prayers at Mosque, evidence suggest that there was no abandonment.

– Title cannot be established on ground of faith, belief; they are kind of indicator for deciding dispute.

– Muslims have not adduced evidence they were in exclusive possession of dispute site. – Muslims were not in possession of outer courtyard of the site.

– UP Sunni Central Waqf Board has failed to establish its case in Ayodhya dispute.

– On the contrary, Hindus established their case that they were in possession of outer courtyard.

– Damage to Babri Mosque was violation of law.

– 14 appeals were filed in SC against the 2010 Allahabad High Court judgment, delivered in four civil suits, that the 2.77-acre land in Ayodhya be partitioned equally among the three parties — the Sunni Waqf Board, the Nirmohi Akhara and Ram Lalla.

– Initially, as many as five lawsuits were filed in the lower court. The first one was filed by Gopal Singh Visharad, a devotee of ”Ram Lalla”, in 1950 to seek enforcement of the right to worship of Hindus at the disputed site.

– In the same year, the Paramahansa Ramachandra Das had also filed the lawsuit for continuation of worship and keeping the idols under the central dome of the now-demolished disputed structure.

– The plea was later withdrawn.

– The Nirmohi Akahara moved the trial court in 1959 seeking management and ”shebaiti” (devotee) rights over the 2.77 acre disputed land.

– Then came the lawsuit of the Uttar Pradesh Sunni Central Wakf Board which moved the court in 1961, claiming title right over the disputed property. – The deity, ”Ram Lalla Virajman”, through next friend and former Allahabad High Court judge Deoki Nandan Agrawal, and the Janmbhoomi (the birthplace) moved the lawsuit in 1989, seeking title right over the entire disputed property on the key ground that the land itself has the character of the deity and of a ”Juristic entity”.

– All the lawsuits were transferred to the Allahabad High Court for adjudication following the demolition of the disputed Ram Janmbhoomi-Babri Masjid structure on December 6, 1992, sparking communal riots in the country. – SC on August 6 commenced day-to-day proceedings in the case as the mediation proceedings initiated to find the amicable resolution had failed.

– The bench on October 16 had reserved the judgement after a marathon hearing of 40 days.

– 1528: Babri Masjid built by Mir Baqi, commander of Mughal emperor Babur.
– 1885: Mahant Raghubir Das files plea in Faizabad district court seeking permission to build a canopy outside the disputed structure. Court rejects the plea.
– 1949: Idols of Ram Lalla placed under central dome outside the disputed structure.
– 1950: Gopal Simla Visharad files suit in Faizabad district court for rights to worship the idols of Ram Lalla.
– Paramahansa Ramachandra Das files suit for continuation of worship and keeping the idols.
– 1959: Nirmohi Akhara files suit seeking possession of the site.
– 1961: UP Sunni Central Waqf Board files suit for possession of the site.
– Feb 1, 1986: Local court orders the government to open the site for Hindu worshippers.
– Aug 14, 1989: Allahabad HC orders maintenance of status quo in respect of the disputed structure.
– Dec 6, 1992: Babri Masjid demolished.
– Apr 3, 1993: ‘Acquisition of Certain Area at Ayodhya Act’ passed for acquiring land by Centre in the disputed area.
– Various writ petitions, including one by Ismail Faruqui, filed in Allahabad HC challenging various aspects of the Act.
– SC exercising its jurisdiction under Article 139A transferred the writ petitions, which were pending in the High Court.
– Oct 24, 1994: SC says in historic Ismail Faruqui case mosque was not integral to Islam.
– Apr, 2002: HC begins hearing on determining who owns the disputed site.
– Mar 13, 2003: SC says, in the Aslam alias Bhure case, no religious activity of any nature be allowed at the acquired land.
– Sep 30, 2010: HC, in a 2:1 majority, rules three-way division of disputed area between Sunni Waqf Board, the Nirmohi Akhara and Ram Lalla.
– May 9, 2011: SC stays HC verdict on Ayodhya land dispute.
– Mar 21, 2017: CJI JS Khehar suggests out-of-court settlement among rival parties.
– Aug 7: SC constitutes three-judge bench to hear pleas challenging 1994 verdict of the Allahabad HC.
– Feb 8, 2018: SC starts hearing the civil appeals.
– Jul 20: SC reserves verdict.
– Sep 27: SC declines to refer the case to a five-judge Constitution bench. Case to be heard by a newly constituted three-judge bench on October 29.
– Oct 29: SC fixes the case for the first week of January before an appropriate bench, which will decide the schedule of hearing.
– Dec 24: SC decides to take up petitions on case for hearing on January 4, 2019.
– Jan 4, 2019: SC says an appropriate bench constituted by it will pass an order on January 10 for fixing the date of hearing in the title case.
– Jan 8: SC sets up a five-judge Constitution Bench to hear the case headed by Chief Justice Ranjan Gogoi and comprising justices S A Bobde, N V Ramana, U U Lalit and D Y Chandrachud.
– Jan 10: Justice U U Lalit recuses himself prompting SC to reschedule the hearing for January 29 before a new bench.
– Jan 25: SC reconstitutes 5-member Constitution Bench to hear the case. The new bench comprises Chief Justice Ranjan Gogoi and Justices S A Bobde, D Y Chandrachud, Ashok Bhushan and S A Nazeer.
– Jan 29: Centre moves SC seeking permission to return the 67-acre acquired land around the disputed site to original owners.
– Feb 26: SC favours mediation, fixes Mar 5 for order on whether to refer matter to court-appointed mediator.
– Mar 8: SC refers the dispute for mediation by a panel headed by former apex court judge F M I Kallifulla.
– Apr 9: Nirmohi Akhara opposes in SC Centre’s plea to return acquired land around Ayodhya site to owners.
– May 9: 3-member mediation committee submits interim report in SC.
– May 10: SC extends time till Aug 15 to complete mediation process.
– Jul 11: SC seeks report on “progress of mediation”.
– Jul 18: SC allows mediation process to continue, seeks outcome report by Aug 1.
– Aug 1: Report of mediation submitted in sealed cover to SC.
– Aug 2: SC decides to conduct day-to day hearing from Aug 6 as mediation fails.
– Aug 6: SC commences day-to-day hearing on the land dispute.
– Oct 4: SC says it will wrap up hearing on Oct 17, judgment by Nov 17.
– SC directs UP govt to provide security to state Waqf Board Chairperson.
– Oct 16: SC concludes hearing; reserves order.
– Nov 9: SC grants entire 2.77 acre of disputed land in Ayodhya to deity Ram Lalla, possession of land will remain with Central government receiver. SC also directs Centre and UP govt to allot 5 acre land to the Muslims at a prominent place for building mosque.

Sharad Arvind Bobde: The Next Chief Justice of India

David Attenborough to get Indira Gandhi Peace Prize for 2019