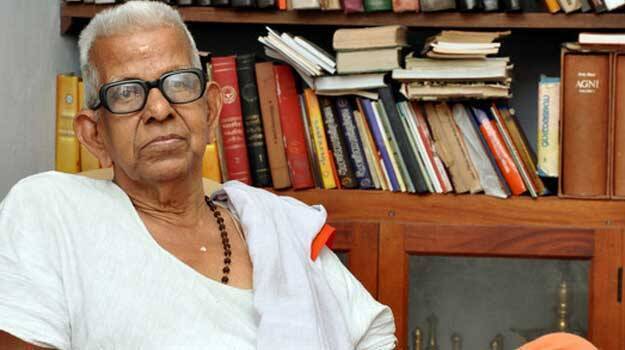 Eminent Malayalam poet Akkitham has been chosen for the 55th Jnanpith Award.

“The Jnanpith Selection Board has announced the recipient of the 55th Jnanpith Award for the year 2019in a meeting. It went to Shri Akkitham, eminent Indian poet writing in Malayalam,” the board said in statement.

Born in 1926, Akkitham Achuthan Namboothiri, popularly known as Akkitham is one of the most revered names in Malayalam poetry.

“A poet of rare integrity, a creator of many works, all considered as classics, Akkitham’s poetry reflects unfathomable compassion, imprints of Indian philosophical and moral values and a bridge between tradition and modernity, delves deep into human emotions in a fast changing social space,” the statement by the board chaired by novelist, scholar and Jnanpith laureate Pratibha Ray, said.

Akkitham has authored 55 books out of which 45 are collections of poems including “Khanda Kavyas”, “Katha Kavyas”, “Charitha Kavyas” and songs.

His works have also been translated into many Indian and foreign languages.